My dad was a fan of the Hanks; Hank Williams (Sr. and Jr.), Hank Snow, Hank Locklin… he was also partial to Faron Young, Ferlin Husky and Lefty Frizzell. Pretty much any honky-tonk singer had him at go.

He also loved stories and story songs, and had a soft spot for cowboy poetry and a fascination with Alaska and the Yukon gold rush.

He was at home in the taverns, pool rooms and bars where a good jukebox and cold tap beer was expected… he could take the crookedest pool cue in the place and run the table on you if a quarter was on the line.

His hi-fi consisted of an 8-track tape player in the dash of a Ford F-250. His record collection, compilation yard sale tapes like “County Gold” and “Number One Country Hits of 1973”… he didn’t like the tapes of a single artist, “that’s just boring!” he’d say. These tapes were stored in a faux leather hinged lid case.

Lying on that bench seat I heard the beauty of Love Like a Butterfly, the scandal of Harper Valley P.T.A., the angst of Ode to Billy Joe and the conquest of Linda On My Mind.

Occasionally, he’d let me listen to AM top 40 radio. The timer on this occurrence coincided with the time between guitar solos. A couple of bars into a particularly tasty guitar solo and, click! In goes the 8-track…

He would have been 83 today. I would’ve called and given him a hard time for being an old fuddy-duddy… “What did you do for your birthday?”, “Oh, nothing, just another day.” He’d say. He’d have listened to Willie’s Roadhouse on the “cable box”, maybe gone out for a beer at the Eagles, and a chicken fried steak at some crappy diner…

I also have a great record of Hank Snow doing Tales Of The Yukon:

Yukon stories by a honky-tonk icon… even though it’s not an 8-track, he’d have loved that. I miss you pop! 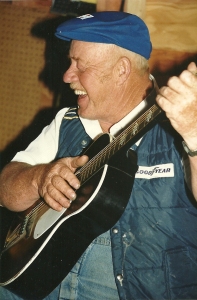