In the spring of 1976, as my days as a elementary school student were coming to a close, my class had one final art project to complete…

Our teacher gave each student a strip of 16mm film, approximately 5 feet long. Each frame on this film was blank and clear… we each had around 200 empty frames.

The project? Each of us were to draw pictures and shapes in each blank frame… that the teacher would then splice together to run as one big classroom movie collage!

We were given some instruction, studied some film animation examples, and turned loose to create our masterpiece. It was a fun, collaborative process that we all looked forward to.

For an hour or so each week of the last quarter of the school year we would study some aspect of film making… story, script, acting and direction. We even had a visit from the local TV station who let us hold cameras and boom microphones.

As June rolled around and summer vacation drew closer we all were putting the final touches on our films. There were bouncing balls that morphed into flying birds, there were frogs hopping, there were cars and planes and jump-rope. I did my best imitation of an R. Crumb Keep On Truckin’ dude.

We worked together on one opening and one long end credit, had some instruction on splicing from the guy that ran the local movie theater and scheduled time for the projector… but there was one thing missing.

Teacher solicited suggestions, my hand went up, there was really only one choice… the hottest song in the world… Walter Murphy – A Fifth of Beethoven! 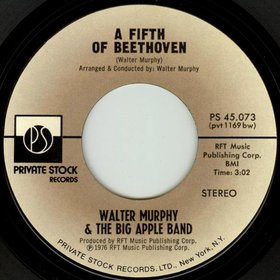 I had a 7″ 45 RPM version of this record I saved my milk money for a week to buy. The B side was another awesome song, California Strut… pure disco heaven!

On the day of the premier, a record player was delivered along with the projector. Owing to the fact that she needed both hands to start and run the projector (and because it was my 45) I was tapped to start the music… officially my first DJ gig!

It went by fast, at about 20 frames per second, each featurette running about 10 seconds, we ended up with a three-and-a-half minute movie and a three minute soundtrack. I dropped the needle on the opening credit fade out and the music ended right on cue with the start of the end credits.

With the telltale “flip, flip, flip” of the film spinning around on the take up reel, our class erupted in applause, each of us proud of ourselves and of each other… but it was the soundtrack that I remember most.

I picked up the LP A Fifth Of Beethoven the other day. I still felt proud after I played it.