I was spurred on to collect the “transitional” FM albums by the writings of Mr. Vinyl Connection and have been slowly assembling the post-Peter Green/pre-Buckingham/Nicks records. 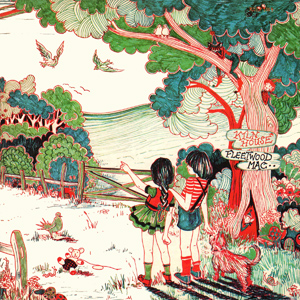 I found this unlikely survivor in a dusty and water warped box of vinyl used as storage for a small town antique store. Amazingly, I was able to salvage a dozen or so records from under the layers of debris without contracting a virus from the accumulated mouse poo.

This record cleaned up better than expected to VG+.

This would be the first FM record I’d listen to without a familiar FM voice (Buckingham/Nicks/McVie) on lead vocal (although you can pick out some background McVie vocals on some tracks). I can’t recall ever hearing any of the songs off of Kiln House before… FM AOR rock stations, satellite radio or Pandora.

The record opens with a Jeremy Spencer song This Is the Rock and a Danny Kirwan song Station Man that both sounded vaguely Grateful Dead-ish to me. Then the Spencer tune Blood On The Floor really got me scratching my head!

Blood On The Floor was… unexpected. Being completely unfamiliar with Spencer’s previous work and style, was this for real? The song sounded like a parody of a Jonny Cash killin’ song or a send up of The Byrds – Sweetheart Of The Rodeo.

I still couldn’t quite wrap my head around where this band was coming from until the end of side one when the Danny Kirwan song Jewel-Eyed Judy:

How had I never heard this song before!?! This is my kind of classic rock and I absolutely love this song!

Side two consists of a couple more Spencer tunes (including a Buddy Holly tribute credited to that rock and roll icon’s mother) two more Kirwan tunes (including the instrumental Earl Gray) and the final track called Mission Bell, where I could most clearly hear McVie’s backing vocal.

For me, Jewel-Eyed Judy alone is worth the cost of owning this record. Otherwise, for all its unbalanced flaws, there are an equal number of gems, oddballs and highlights.