Happy Birthday Richard Starkey, A.K.A. Ringo Starr! You’re 75 today and I’ve been reminiscing some about your life and Beatles experience.

By the time I was 29 I was a mess, lucky to have a job, flailing emotionally… I can’t imagine what a rollercoaster you were on. In that 7 years and 8 months you were a key part in the transformation of rock and roll from statement to purpose; from something you could pin up on your wall to something you could pin a foundation to; from a fad to a philosophy.

I love the album Ringo from 1973. Side one has I’m The Greatest (penned by John Lennon), Have You Seen My Baby (penned by Randy Newman), Photograph (Starkey/Harrison), the best song on the record, Sunshine Life For Me (Harrison) and the top 10 single cover of You’re Sixteen: 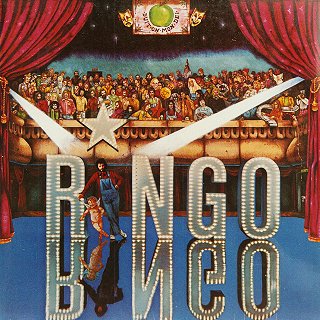 The other three Beatles are depicted on the cover (what’s with the bib overalls?), a lyrics booklet (illustrated by Klaus Voormann) is included, The Band, Jim Keltner, Nicky Hopkins and Billy Preston (along with John, Paul and George) are featured musicians.

Mr. Starkey, you are one of the main reasons I love and appreciate rock and roll music. Thank you from the bottom of my heart.