A twenty-something singer/songwriter and guitar player, born on a cotton farm in rural Louisiana, headed out for the bright lights of Nashville with stars in his eyes and a recording contract in his hand. He had been gigging around the bars and dance halls of Louisiana and Texas since high school and had a regional following that caught the ear of Monument Records, who owned his contract.

Toiling in near obscurity for three years, our hero released several singles that fell flat on the U.S. market. However one release, Soul Francisco, was played on French radio and became the hottest release in weeks!

Record store owners in Paris started calling Monument requesting more copies of the release… it was a hit!

Discothèques in France and Belgium flayed the record and live performances were booked. Our hero was a star!

The artist is Tony Joe White and the album of the day is Black And White: 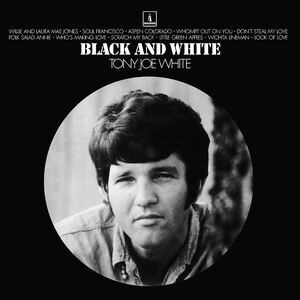 Shortly after his European success, while still building his regional following in his home base of Houston and hand delivering his records to area record stores, a D.J. in Los Angeles finally picked up on the record’s best song Polk Salad Annie:

It was a top 10 hit. Elvis re-recorded it and the rest, as they say, is history.

Black And White is a good record. Side A is all Tony Joe White penned tunes with covers from Slim Harpo, Jim Webb and Burt Bacharach on side B. The rhythm section consists of Mussel Sholes veterans and White’s soulful baritone and funky guitar are featured throughout. My copy is just a fair example, with a lot of distracting crackle and pop… although Polk Salad Annie plays pretty well!