My first recognition of Cat Stevens did not come from the record store. It didn’t come from radio. My first taste of the Cat came when the film Harold and Maude was playing in heavy rotation on HBO.

I specifically remember recreating a prank from that movie where young Harold, obsessed with death, placed a rag stuffed human dummy in a roadway and watched how drivers reacted. My recreation didn’t turn out so well and got me grounded… but that meant I was able to watch Harold and Maude a few more times and soak up the Cat Stevens.

Later, after Stevens’ conversion to Islam, but before his support of the death fatwa on author Salman Rushdie, I got a copy of Tea For The Tillerman: 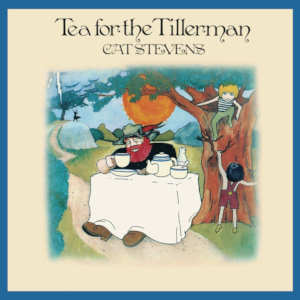 My VG+ copy was recorded to cassette and played in heavy rotation in the tape deck of my 1969 Ford Bronco on trips across Washington State to visit family and friends.

This singer/songwriter spiritual and introspective album may seem like an odd companion on long, late night, road trips, but I loved it! Many of the themes about everyday life, strife, struggle and the search for the Meaning Of Life resonated with me at that time in my life… which was coincidentally the same time in Stevens’ life when he was writing and releasing these songs.

Particularly meaningful was the song Father and Son, which still gets me right in the tear ducts whenever I hear it:

I’ve never really gotten into any other Cat Stevens records. I may have to remedy that soon…