This date in 1969 marks the end of the Woodstock Music & Art Fair, Woodstock! The concert was to have ended on Sunday the 17th, but thunderstorm delays early Sunday caused the acts to ripple past midnight into Monday morning. In fact, the planned finale, Jimi Hendrix / Gypsy Sun & Rainbows, didn’t begin until 9 AM Monday morning.

To mark this anniversary I dusted off my copy of: 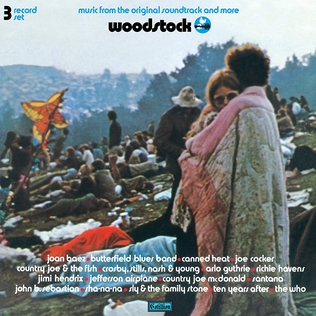 Woodstock: Music from the Original Soundtrack and More. This three album compilation encompasses the stuff that was in the award winning movie, including the famous “brown acid” announcement, the Stephen Stills apology that they were “scared shitless” and the “no rain!” chant.

My celebration included listening while naked, running the sprinklers and rolling around in the mud while stoned.

As an album of collected and interconnected songs, this record stinks. As an historical document of one of the most important events in rock-and-roll history, it ain’t bad. Thirty some bands played, but only about half of those ended up on this record (another record, Woodstock 2, released the following year mainly expanded on the original, leaving many of the performers in obscurity). Recording engineer Eddie Kramer managed to make this thing sound as good as a live chaotic festival could.

Rock critic Robert Christgau wrote of this LP: “”I left one thing out of my Woodstock article,” says Tom Smucker, author of a good one. “I left out how boring it was.” And though you can be sure it’s not like being there, this three-record set does capture that.”