Well, I’ve gone and done it. I’ve FMF’ed all of my proper FM records. I’ve still got to find a few (Tango in the Night and The Dance) of the modern FM records, will probable pass on the live stuff, and need to jump all the way back to the Peter Green FM to fill out The Collection… someday.

So, on to the solo stuff I’ve managed to collect.

I thought, as a counterpoint to yesterday’s blog about Graceland, that I’d check out the 1981 album The Visitor from Mick Fleetwood: 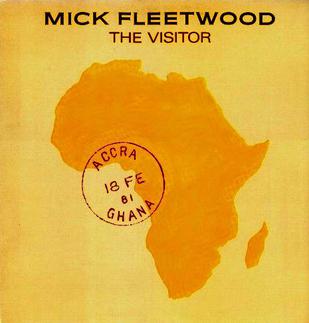 Whereas Graceland used township jive (and tex-mex, and zydeco) as the foundation of a pop album, The Visitor mainly uses pop as the foundation and adds non-western traditional music as an instrument or a sideman in the band.

There’s a Buddy Holly song on here for crissake!

Not that that is a bad thing, the record is well recorded and, being produced in that golden age after digital but before CD, sounds amazing. Two FM songs are covered, Rattlesnake Shake from the Peter Green era and Walk a Thin Line from Tusk. As a matter of fact, Peter Green sings and plays guitar on Rattlesnake Shake (marking my only recorded evidence that Peter Green actually exists) while Lindsay Buckingham and George Harrison are both credited on Walk a Thin Line.

The album’s gems, much like Graceland, are in the more collaborative efforts; particularly the title track and Amelle (Come on Show Me Your Heart).