Journey’s second album was Look into the Future from 1976. 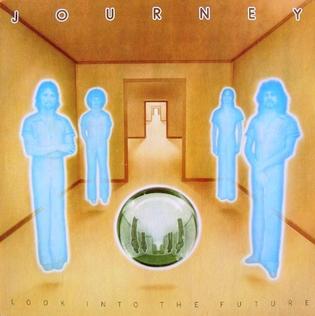 Here we find the boys still in experimentation mode, trying to decide whether to chase the rabbit down the progressive hole, climb the jazz-rock mountain or press on toward pop-rock superstardom.

Not that the debut was a progressive touchstone by any honest metric, but it did have two instrumental tracks that stretched toward that goal.

Here we have a great record for Gregg Rolie fans. He wrote (or co-wrote) the lyrics for seven of the eight songs and sang the whole thing. Neal Schon and George Tickner penned the score for these same seven. This makes the single non Rolie/Schon tune stand out a bit. I was surprised here by the inclusion of a Beatles cover… George Harrison’s It’s All Too Much from the Yellow Submarine album (worth the price of admission right there if you ask me).

So, what is it? I’d say side one of Look into the Future is more of a straight ahead rock record than their debut while side two spreads out a bit more and was a better fit for my jazz-rock sensibility.

Here’s a little Rolie to whet your appetite: