So… I’m not going to say that it was the best concert I’ve ever been to, but it was certainly one of the most entertaining. For the last of our summer concert Take Your Vinyl To A Concert series, may I present Weird Al Yankovic: 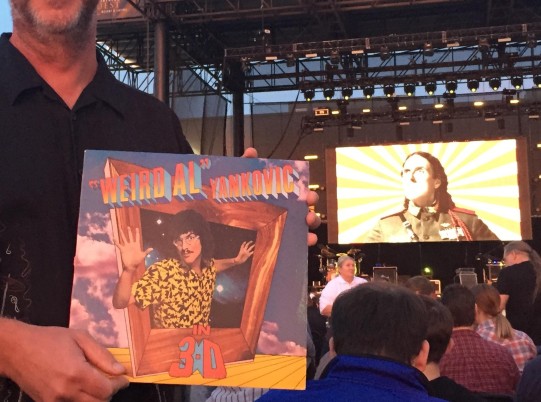 15 years ago my girlfriend (now wife) went to see Weird Al in Great Falls Montana. I was at several thousand miles away at the time but still remember her concert review via phone the next day: “It was fantastic!” was the bottom line.

To boot, after the concert was over, she went to the coolest bar in town and, lo and behold, Weird Al himself made an appearance. This story, often told to friends and family, has become her, in the words of Weird Al himself, Lame Claim To Fame.

As much as I didn’t want to believe her, this story has persisted for 15 years. So when the final outdoor summer concert series announced Weird Al would be on the bill, we had to buy tickets!

The show started at 7:30 so when the “it’s time to find your seat music” started precisely at 7:28… 5000 geeks in the audience all simultaneously looked down at their calculator watches.

The show started with a long single camera shot of Al walking through the concert venue while singing a song. Towards the end of the song he made his way on stage to a full on standing “O”.

The show consisted of him doing what seemed to be every song parody he’s ever written. He would perform a song in full costume with band and audience participation, and then do costume changes while hilarious video clips played. 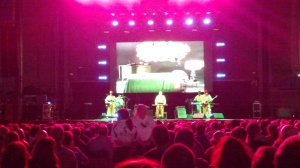 The seven worst words you can hear a live performer say from stage is “here is something from our new album!”. Weird Al did manage to slip in a few newer songs, but he left and no one disappointed using a tactic that more oldy moldy artists could benefit from:

Don’t worry… he did full versions of the big MTV hits… all the Michael Jackson, Madonna, and other pretentious diva parodies that he’s so well known for.

But in between he would do a single verse/chorus of five or six of his lessor songs in the span of one so everyone got to hear their favorite. He even parodied his own parodies by mocking the MTV Unplugged series, Hot Jazz combo and lounge singer.

So, yes I am a Weird Al fan. I don’t imagine I’ll get a sticker of a calculator watch posted on the back of my car and follow him around like all the VW buses with Phish stickers do… but if he comes back to town I WILL be in line!

One thought on “September 14”