Rest in peace Mr. John Cummings (aka Johnny Ramone) who died on this date in 2004.

I didn’t learn about The Ramones in a traditional way. I never heard them on the radio, there was no older sibling to guide me, there was not an all ages show or even cool record store with albums and posters to intrigue me.

Nope, none of this. I learned about The Ramones through HBO: 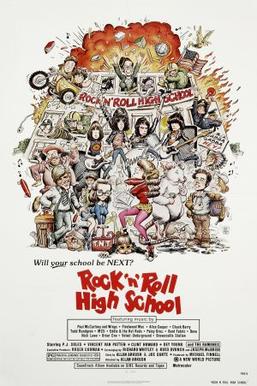 This movie, filmed in 1979, was played in fairly regular rotation on HBO in the early eighties. This was my introduction to the music of The Ramones. I had never seen anything so weird… so cool!

From what I remember, the plot of the movie was quite simple. A high school in Los Angeles was full of students who loved rock and roll. Their leader (played by the actress PJ Soles) was trying to get a song into the hands of Joey Ramone.

When the teachers intervened bedlam broke loose in the high school and The Ramones came to the rescue.

I haven’t seen this movie then at least the mid eighties, but found a unopened copy of soundtrack to rock and roll high school at a local thrift store not too long ago.

I figured today would be a good day… an appropriate day, to cut open the cellophane, smell the virgin vinyl and relive those memories in honor of Johnny Ramone.

Not that I remember any of this but turns out there were quite a few decent songs on this soundtrack! Including songs by Nick Lowe, Brian Eno, Devo and Todd Rundgren.

However, the highlight of the soundtrack remains The Ramones songs, especially a 10 + minute medley including Blitzkrieg Bop, Teenage Lobotomy, California Sun, Pinhead and She’s The One.

So, Mr. Ramone, you are gone but not forgotten… at least on my hi-fi today!