I thought I’d spend a little time this evening with these three records I have agreed to trade for some other stuff that I wanted: 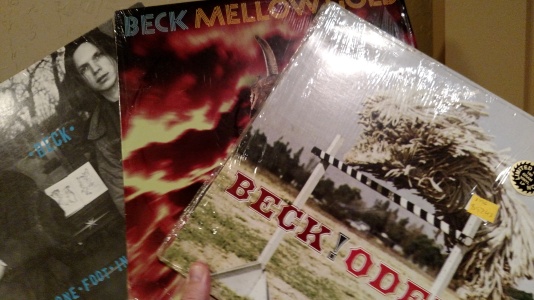 Beck; One Foot In The Grave, Mellow Gold and Odelay.

Lo-fi? Anti-folk? Alternative? How do you classify music like this?

I’ve had these albums on CD since they came out and haven’t listened to them since the late 1990s. It was more a function of buying what was new and what you were supposed to like rather than what really hit home.

This music still sounds experimental 20 years on… a kind of cut and paste approach with musical samples and musical styles as well.

All these years later, they’re better than I recall, but they still don’t reach out and grab me like I want a record to. They were a good listen, but I’d be just as content with the Beck Pandora channel or my CDs.

The fellow I’ve traded them off to was very excited that they were coming his way. He claims he’s been looking for these records for years and I am glad to oblige.

Could I have sold them for more on-line? Could I have started an eBay bidding war? Perhaps. But I’m trying to bank some karma points.

Maybe I’ll find that 3rd Journey record in the process?