Next up on my Verve Records recent find parade is an album from Jimmy Smith called Bashin’ The Unpredictable Jimmy Smith. 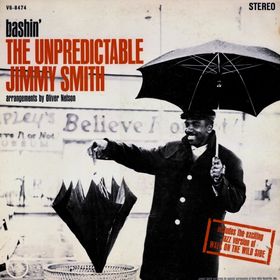 This is the second of three Verve Records I found at a local thrift store recently. Although not in as good a shape as the Willie Bobo record, it is still is very playable.

I had previously reviewed a Jimmy Smith album on this blog. I have to say I was not all that impressed with Mr Smith. The subject matter of his standards record just sounded hokey and a little to “Take Me Out To The Ball Game-ish”.

I had kind of written Jimmy Smith off! Until recently, when I picked up some Beastie Boys vinyl and heard the Jimmy Smith samples on songs like Root Down.

I figured I needed to give Jimmy another try and this album showed up in the thrift store. As with Bobo, this is Smith’s debut on Verve.

What a difference from his standards album! Here side one is with a big band and side two with his trio. The album touts a “hit version” of Walk On The Wild Side… but it was not the song I had imagined…

On the trio side, Jimmy really swings! With a great effort on the Smith penned title track and a killer version of the Johnny Mercer chestnut I’m An Old Cowhand From The Rio Grande.

My scuffy placeholder copy will do just fine until I find a cleaner copy elsewhere.