I had a nightmare. I dreamt that I was sitting around a campfire with David Crosby, Stephen Stills, Graham Nash and Neil Young and we were passing around a guitar… each playing our best.

In this nightmare, although I never did actually get to embarrass myself with my meager finger picking skills, I knew that my talent could never hold a candle to these four heros of mine.

It could be that I’ve been spending too much time with the first CSNY album, 1970s Deja Vu: 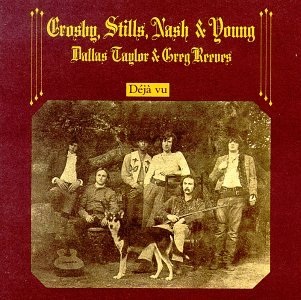 This is a weird record. In production it’s reminiscent of The Beatles White Album where individual band members came to the studio with fully formed, sometimes meticulously scripted, songs and the other members of the group pitched in where appropriate.

It consists of two songs each from C, S, N and Y with one collaboration between S and Y as well as the single Woodstock ( written by Joni Mitchell).

Deja Vu was a great launch pad for each of these for fellows blasting off into separate solo superstardom in its wake.

As for the quartet, they released a live album from the Deja Vu tour the following year but couldn’t stand each other enough to hold it together and dissolved. The next CSNY release was the greatest hits in the mid seventies (wishfully called So Far, even though CSNY wouldn’t record together again until 1988).

One thought on “October 29”