One more from my Hoomana thrift store pick, a cut-out version of Iggy Pop’s record Blah-Blah-Blah from 1986: 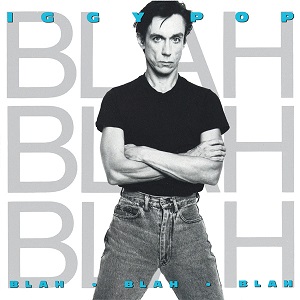 This thing was among fairly large selection of DJ or record store gold label promo records at the same thrift store. Many of the records in this lot I would have brought home except for the problem of weight and checked luggage air fair.

I don’t own any Iggy Pop and, honestly I’m embarrassed to say, I had conflated Mr. Pop with Lou Reed when I brought this record home. For whatever reason this album cover reminded me of the Lou Reed – New York album from 1989.

As a matter of fact, after the first spin on our living room TT, I made a comment to my wife that Lou Reed’s voice sure has changed from the Velvet Underground until this solo album came out. She corrected me… and pointed and laughed (which was appropriate).

The big hit on the record entitled Real Wild Child (Wild One), is was a remake of a 50s rockabilly number… a couple of the other songs were co-written by Steve Jones of Sex Pistols fame, and David Bowie’s fingerprints all over it as well.

As the worst Lou Reed album ever, Iggy Pop’s Blah-Blah-Blah is pretty good!