Allison’s songs have been recorded by artists from the Who to the Clash to the Pixies, but I first became aware of him through the artist Greg Brown.

Brown did a great song about playing in some dive bar in America with snooty waitstaff, bad pay, horrible acoustics and no advertising… only because “last November Mose Allison played here”.

My roommate at the time bought a Rhino Records compilation called Allison Wonderland and I became a fan of Allison’s laid back vocal drawl and blues based jazz compositions.

But today I’m not just remembering Mose Allison and celebrating his birthday… I am also paying tribute to the person from whom I got these Mose Allison records; they once belonged to Bill, the father of a good friend of mine.

My friend Chris and I were inseparable for several years in the late 90s. We shared a love of music (and beer) and went to see many concerts during that time. I was doing some small scale concert promotion and remember hosting one specific performer named Chris Smither. The night of that concert Chris came with his father and that was the first time I met Bill.

Bill was a music junkie! He loved jazz and blues especially and had great knowledge of artists and recordings and record labels that were well beyond my experience. He could talk for hours about classic jazz and blues songs… their origins, who covered who, the beautiful obscure.

Sometime after I had moved away and Chris and I had drifted apart, I heard the news that Bill died in a terrible accident. To make matters worse Chris was witness to the whole thing.

It had been more than 15 years since I saw Chris, but this summer while visiting the in laws, I gave Chris a ring and we got together to reminisce. We spent a great evening catching up and talking about loved ones past and present.

I told him about my 365 days of Vinyl and he said “I’d like you to have my parents record collection”.

I was blown away! I was honored and I was humbled and said I would gladly give them a home in The Collection where he would be welcome to visit anytime he wanted.

But most exciting to me were three records by Mose Allison: 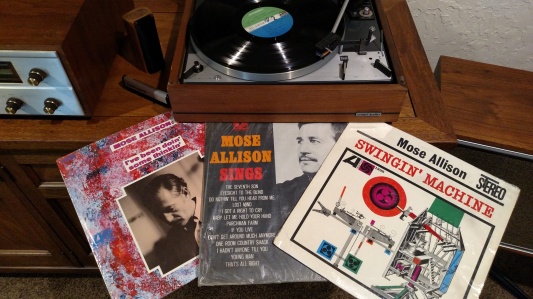 So happy birthday Mose and many happy returns! And here’s a toast to you Bill… thank you for raising a wonderful son and inspiring me to dig deeper into the jazz and blues that you loved so much…