None of my stereo equipment when I was a kid was “stereo” equipment. I had at my disposal*:

1) a hand me down portable turntable with a built-in am radio (mono).

3) a portable 8-track player that looks like the detonator for explosives (mono).  And,

4) a cassette recorder… the kind with a built-in speaker that you would use to record a college lecture or some such thing (also mono).

My first experience with “stereo” was on the song Paradise By The Dashboard Light from the Bat Out of Hell album by Meatloaf circa 1977: 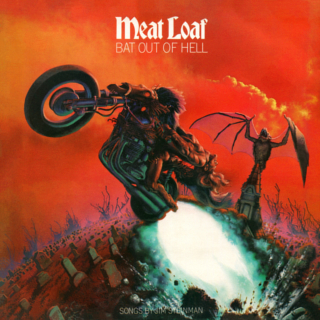 Meatloaf was as close as my AM radio station came to playing Bruce Springsteen… You Took The Words Right Out Of My Mouth and Two Out Of Three Ain’t Bad were played often. But Paradise… that song was only played after hours!

It was long and it was racy, it was about **whisper** sex!

Once one person heard the song it became almost a right of passage for the rest of us… we even devised a telephone tree! If someone heard it playing, they would call two others who would then call two others and so on for the eight minutes it was broadcast. It became my mission to capture this alluring creature…

Night after night I stayed up past my bedtime; record, play and pause all pressed on the cassette machine, which was set up next to the record player (which contained the AM radio).

Songs would come, songs would go and I held my breath at every segue, waiting for the opening sounds of Paradise to thrill me through the barely audible speaker.

When I couldn’t hold my eyes open any longer I would let the cassette record while I drifted off to sleep hoping to capture this ever elusive song.

After several Meatloafless nights, I finally managed to capture Paradise on my cassette!

I promptly recorded my cassette to my reel to reel, cued both up and, cassette on the left side of the dresser… reel to reel on the right, could simultaneously select play to enjoy Paradise in the full “stereo” glory!

I practiced, I invited friends, we had a listening party. The scintillating subject matter thrilled us all like no song had before!

Eventually someone’s older sibling obtain the album for real and my parlor trick was no longer cool or necessary. My cassette, the only one in the house, was eventually recorded over by my father making a conversational tape send to someone. The reel to reel was overdubbed by a field recording of me screaming like a police siren so I could bungee cord the player to the front of my bicycle and ride up and down the road annoying the neighbors.

Bat Out Of Hell was my first taste of opera, my first experience with goth metal, and my first encounter with a Broadway musical. It was big and loud and silly and bombastic and all of these things together made it the great record it remains.

Unfortunately, it suffers from poor production value (on my first edition anyway). It sounds thin and small even though the sounds coming out of the performance are huge.

So, I don’t think it’s a great sounding record, but it’s one of those albums that you must own!

Just make sure you get the stereo version.

*We also had a JCPenney console stereo in the front room, but we only had one speaker hooked up to it (for home decoration reasons I’m assuming).