Looking back at this blog I’ve noticed that there are some deficiencies, some gaps where The Collection is rich but the blog is poor. One of these gaps is the Eagles.

I am an Eagles Greatest Hits fan! I never did buy many of their records but their sound and style defined much of the area where they were dominant.

The exception to the greatest hits rule was the album Hotel California: 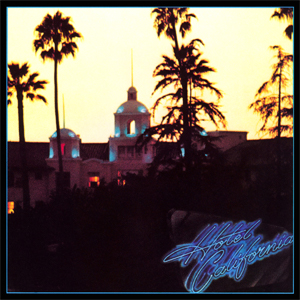 On a visit to my aunts house in Oregon, on a trip to a local music store, my cousin picked out the recently released album Hotel California. My aunt was a big fan of the earlier Eagles stuff and wholeheartedly agreed to purchase this record for my cousin.

I can still remember that first spin! The Hotel California song was long for AM radio standards, and had an extended guitar solo that I can still hum every note of.

I saw the Eagles several years ago in Moncton New Brunswick at an outdoor concert venue called Magnetic Hill:

Four of us went for a Golf and concert extravaganza and dealt with torrential rain prior to the show.

Luckily our assigned seats were in a grandstand stage right. But when it became obvious that Hotel California was queued up, I walked my way through ankle deep mud up towards the front of the stage just so I could hear Don and Joe’s guitar interplay of one of my favorite guitar riffs

Most recently I’ve been impressed by Walsh with his appearance on the Foo Fighters HBO series Sonic Highways.

If you haven’t had a chance to check out this series, you should! It is really fantastic!

Dave Grohl really coaxes the best out of his band and his guests and captures the soul of region he is exploring.

The Sonic Highways contribution that Joe Walsh made was for the Los Angeles region. The song the Foo Fighters wrote was called Outside and, if you watch this video, you can conceive the brilliance of Joe Walsh:

Joe’s part starts just after the 5:45 mark… but it is really interesting to compare Walsh’s sparse and subdued style with the forensics of the Foo Fighters. And don’t take my word for it just look at the reaction that the rest of the band gets when Walsh plays his part!