Nilsson Schmilsson was released in November of 1971. So, what better way to close out month 11 and my 335th post. 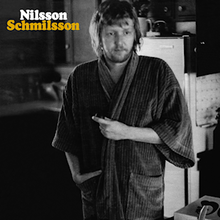 To me this record sounds like what would happen if you could plug your headphones directly into brilliance! It feels like watching a gifted mathematician prove some difficult equation on a chalkboard. Some of the songs are so off kilter that it keeps you guessing around every turn… you keep questioning the tone or the tempo over and over, always being set straight by Professor Nilsson.

The well known song Coconut has been with me as long as I can remember. As a kid I didn’t know Harry Nilsson wrote the song but, even today, every time I see a coconut I start singing.

But the real heart and soul of this record is the song Jump Into The Fire. This song is unadulterated bombast and fun, from the manic singing to the oddly detuned bass part, it is one of my favorite songs of all time: