You have to wonder how much worse it would have been… 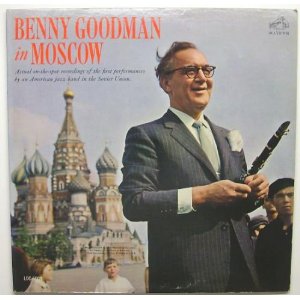 Recorded in the summer of 1962 and released in December of that year, this record was billed as a recording of the first jazz band ever invited into the Soviet Union.

This tour encompassed 6 different cities, several shows each, between May 30 and July 8th of 1962. The tour started and ended in Moscow where this recording was eventually made.

Goodman wanted to make a statement… so instead of just playing his well-known classic material, he commissioned a stable of young composers to create new music for his orchestra to perform. He also brought on some young hotshot musicians for the actual tour to liven up the performance.

I believe that it is things like this, cultural outreach that bridges gaps between people who otherwise would only recognize each other through propaganda channels, are some of the most important things we segregated humans can do.

My tastes of late have trended more towards the new jazz that I have been discovering… less swing and big band structure and more modal free expression. I also have a bias against live recordings for the most part.

But this record, this double album of big band swing, recorded live in front of capacity crowds of repressed people in the Soviet Union before I was even born, was thrilling!

The All Music review of this record relies heavily on CD and a Giants of Jazz bootleg. The liner notes state that jazz aficionados might be hard pressed to find an original copy of this record.

I am thrilled to add this one to The Collection.