I suppose it is expected that I write some profound words about what I’ve learned from this experience or how I’ve been affected?

I mean, spending some part of each day with vinyl records and the music contained on them every day for a year has to have taught me something, right?

I can say for sure that there has been a change… and one I would consider positive! I have wasted way less time in front of a TV screen or on Facebook or the like and way more time listening to new music.

I’ve also spent way more time on my hands and knees in thrift stores and junk shops and way more time in front of a computer screen than and I am used to.

House projects, yard work… many of the normal tasks in life have gone undone while I’ve been searching for that holy grail or listening to the new find.

And I got fat. Seems beer and blogging go together really well!

In any case, I don’t feel that I have changed too much… my love of music and records has always been strong. My music muscles had just become atrophied over time unused.

But I do see a change in those around me… the new music my wife is now interested in, the turntables friends and neighbors have set up, friends and family also looking for vinyl records for The Collection…

I’ve learned what I always knew; music is for sharing! If I have a record that I really love and share it with someone who also digs it, the world is a better place. If I come across a great record and play it for someone or someone brings a record to me that I listen to and am inspired by, that world gets even bigger.

I also reacquainted myself with the act of truly listening to music. Carving out some time to just sit and contemplate what is coming out of the loudspeakers. Not passively listening, while performing life’s tasks, but opening my ears and concentrating on the music!

I’ve also been asked, when people find out that I am listening to more music on vinyl, if it sounds “better”. I can answer here and now with a definitive – sometimes?

It really depends! Some records I have sound fantastic… some don’t sound as good as their CD counterparts. But I can guarantee you my vintage tube amplified stereo sounds better than your crappy earbuds listening to a compressed digital file on your iPhone!

The bottom line is that I listen better… not that any one format sounds better than another.

Now to round out my 50 Greatest For My 50th Year list… is the category The Big Ten!

When I first started thrifting for records, and had people keeping eyes out for records for me as record store trade ins… I had a rough list of what I was looking for. I just told people to look for the Big Ten; the Beatles, the Stones, Led Zeppelin, Pink Floyd, Jimi Hendrix, the Doors… anything else from the British Invasion, any blues, any jazz or any alternative or punk records.

This worked fine for a while… but I found that it left some things that I was really interested in out and other things were kind of redundant.

What about awesome record covers? What about albums or album covers that were art? What about just some great labels that put out reliably awesome music? What about outlaw country?

I refined The Big Ten overtime and came up with a list of reliably valuable records that would trade for great value and also be awesome to listen to.

The Big Ten now consists of anything British Invasion, anything Classic Rock, anything psychedelica, any blues, any jazz, any alternative or punk records, awesome labels such as Verve… Blue Note and Janus, any kitschy cool albums, classic cover art and anything that fills a hole in The Collection for instance:

These records still sound purposeful and have an immediacy that is lacking in much of the contemporary music of today. Subtle introduction to ska and reggae beats are an added bonus.

Because she covers section of the collection has grown exponentially in the last year. I just love the Madison Avenue “sex sells” aspect of exotica. I can only imagine many of these covers on the rack at Woolworths with prudish grandmothers dragging their drooling grandbabies away from this smut!

A classic rock masterpiece. Still one of my all time favorite records and destined to be on any top 10 list I ever come up with. The memories of twirling sundresses on lazy summer afternoons still inspire.

Dark Side Of The Moon – Pink Floyd

Is it British Invasion? Is it classic rock? Is it psychedelica? This album still defies classification. It’s a true masterpiece in every sense of the word. I have had so many great experiences while listening to this music… this year’s supermoon spend with loved ones was the icing on the cake!

Jimi is holding down the blues mantle here in The Big Ten. Blues records are few and far between in this neck of the woods and all that I’ve had have either inspired or been inspired by Jimi Hendrix. Adding a box set to the top 10 is a little unorthodox, I know. But some of these covers are fantastic… especially the cover of Electric Ladyland! To boot song Little Wing is probably the most perfectly concise rock song I’ve ever heard.

I found a stereo and a mono copy of this 50 year old classic in the same thrift store on the same day. The deep groove Verve label records all sound amazing! Here even after 50 years, this record is my go-to demo for vinyl on my stereo to the uninitiated.

My all time favorite jazz record! I found a sleeveless, coverless, scratchy, dirty original in the bottom of a thrift store bin 20 years ago and have played it on nearly every August 17th since. This year I finally upgraded to 180 gram remaster reissue and could not be happier.

Records from this era rarely surface on the used market. Sure, you can get represses like this one on Amazon or eBay, but the originals? You just never see them. This era, when CDs became king and vinyl was relegated to the dustbin of history, it took a strange person to continue to buy original vinyl. Thank goodness someone in this area bought this repressing and decided to part with it on Craigslist. This experimental hard art rock album snuck into the mainstream under the guise of grunge back in the day and has held up better than most of its contemporaries.

I remember heading to preview an estate sale that had many vinyl records included. I had seen a partial list with this album on it. I told my wife that I was really excited about this one because this was a great example of why you wanted to own vinyl records! The album cover was so deep, so detailed that you can spend hours combing over it while listening to the music over and over again. The estate sale record had a modesty sticker plastered right on the good parts of this record cover! I passed, but found an exceedingly clean copy a few weeks later at the local record store.

I guess I’ll leave you with one final top of the top, best the best, favorite of the favorite pick: 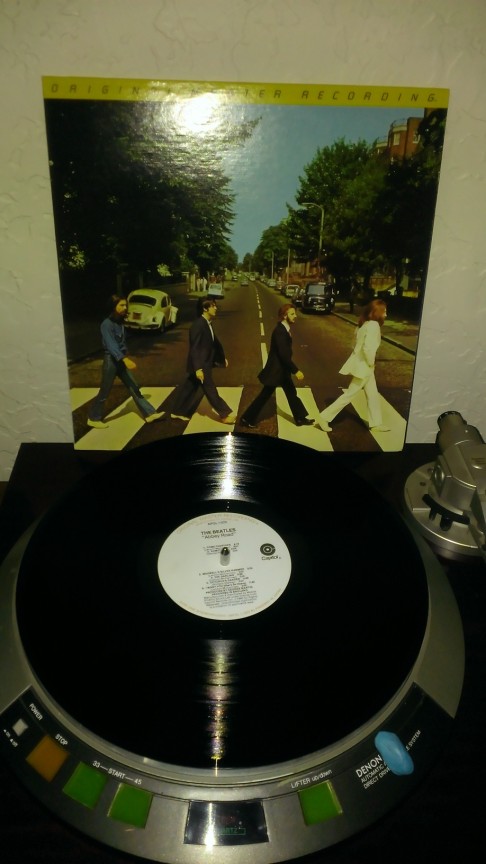 I’m off now to celebrate New Years Eve with my wife. As my 50th year comes to a close, her 40th year begins… she’s a new years baby and we’re going to celebrate tonight just as we did a year ago, at a casino concert! I want to thank you all for listening, caring and sharing.

…and the circle of life continues, round, just like a vinyl record, but spinning way more than 33 1/3 RPM.