You’re taking a stroll during your break from your office on Savile Row in London when you hear it;

You cast about trying to locate the source of this music. You walk to the corner and look both ways before you see a small crowd gathered outside of number 3, Apple headquarters.

“I said move over once, move over twice. Come on baby don’t be cold as ice”

As the crowd swells in size, traffic begins to snarl. Bankers huff and chuff through the crowd trying to get back to business. Office girls stand on tip toes and jump up and down with glee. It’s Beatlemania all over again!

“I do a road hog, Well you can penetrate any place you go, I told you so, all I want is you! Everything has got to be just like you want it tooooo. Because…”

Cars are abandoned, sidewalks are blocked, adjoining and buildings windows are thrown open. Maybe a better look can be had from inside one?

From your new top floor perch you can see them plain as day, The Beatles! 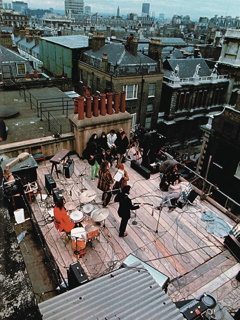 They haven’t played out live together for years, what is this? Is it a stunt? Is it for television? Are they practicing for a tour? Or is it all of the above?

Now the authorities have arrived. They’ve blocked off the street and there dispersing the crowd which is steadfastly holding their ground. They’ve talked their way into number 3 and made it up to the makeshift stage.

“Sweet Loretta Fart thought she was a cleaner but she was a frying pan, yeah!”

The police are waiting, they’re watching but The Beatles aren’t done yet. They ripped through one final version of this awesome rocking number before bidding adieu and you were there to see it all!

“Get back, get back, Get back to where you once belonged. Get back Loretta… Go home”

You make your way back down the street and out in the crowd, you head back for the office. Your boss will never understand but you were there, you were there!

I had been eyeing a 180 gram reissue of the album Legend by Bob Marley and the Wailers:

This posthumous 1984 release had been in my CD collection since my very first CD player. I even sprung for a later copy with video tracks included!

With a Christmas gift Amazon credit in my hot little hand there was little doubt which record I was going to order.

Now, I have ordered several new reissues from Amazon or from one of the local record shops. 180 gram audiophile etc etc. I have always been extremely pleased with the quality of these reissues.

This one, on the Island Records label in association with Tuff Gong, was a 2009 pressing and listed the country of origin Europe.

When the package arrived, everything seemed fine. The packaging was the typical Amazon double boxing, the cover was in fine shape and the disc came out flat and true.

But once the thing was on the turntable, that’s when I noticed there was an issue. It seemed like the volume knob had mysteriously turned itself down. I had to crank it up to near half of full just to get an acceptable volume level in the listening room.

Having done so, the pops and clicks became more noticeable, even moved to the forefront of the music in some cases. That’s right, pops and clicks! On a brand new record!

Further examination turned up a small sticker on the back cover that said made in the Czech Republic:

Could this be the problem? Was this an old Soviet record pressing plant turning out shit copies for the re-emerging of vinyl market?

Although reviews of quality were mixed, most were positive on balance with a few negative reviews mostly due to aesthetics.

One thing’s for sure, the quantity was there! There were some reports of GZ manufacturing many of the new releases we are now consuming… as many as 6 million pieces per year!

So, with that theory shot down I had to look elsewhere. What could possibly be the issue? Why did my copy of Legend sound so thin? So compressed?

Then it hit me, I had recently purchased a bootleg copy of the soundtrack from the movie The Crow for my wife. This copy developed slight warp, so I took to a friend to have straightened in his fancy schmancy record heater thingy. While we were looking at the record he noticed that the run out dead wax on the record was amazingly thin, almost right up to the label. He mentioned that, in order to keep the dynamics of this vinyl where the manufacturers wanted it, they had to use all of the acreage available to them on the record surface. I also commented that they had to leave two of the tracks from the CD off of this bootleg because there was not enough room! Then, while cleaning up a batch of my K-Tel compilations, I was noticing how many tracks, up to 20 per record, we’re on each of these compilations. How did they manage that?

Well, if you’ve ever listened to one of those K-Tel compilations, you would know that the sound quality is quite bad. Very thin and compressed, even worse than my copy of Legend!

I then went and added up the time of each of the individual 14 tracks on Legend. Lo and behold, this album is almost an hour long!

So, the moral of the story is if you’re buying a reissue of an album from the CD era, it pays to do a little arithmetic!

Of course it was up to me to offer up a special gift for such a special person on a special day.

It took a fair bit of planning, a little deception and some outright fibbary, but I managed to whisk her away to see her favorite band!

Since I’ve known her she’s just raved about Queensryche! The first time she heard them out of a car stereo in a parking lot, the older guy that introduced her to the music, her favorite album, her favorite song… her enthusiasm is contagious and I’ve become a fan as well.

Turns out that the newest lineup (minus Geoff Tate) was scheduled to play the New Years Eve show at the Nugget Casino in Reno Nevada. With some help from friends I managed to arrange the trip and fly her there without spoiling the surprise!

The concert venue was intimate and set up cabaret style. One of her best friends made the trip as well and we had great seats at the late night show!

She scored an autographed copy of the newest record, a signed photograph, a shout out (and a kiss!) from the lead singer at the encore… even a set list as a memento. The plan went off without a major hitch and everyone seemed to enjoy themselves.

I don’t know how I’m going to top that one but it will be fun trying!

So another one of my musical heroes has passed away. Glenn Frey, a founding member of the band The Eagles, left the eyrie for good at 67.

Co-founder of the band, musical partner and sometimes combatant brother Don Henley had this remembrance: “Glenn was the one who started it all. He was the spark plug, the man with the plan. He had an encyclopedic knowledge of popular music and a work ethic that wouldn’t quit. He was funny, bullheaded, material, generous, deeply talented and driven.”

What else can you say about an artist who took the baton of laid-back California country rock and helped push it across the finish line as the biggest American band of the 70s?

I was lucky enough to see The Eagles back in 2008. Sound wise, theatrically and artistically it was one of the best concerts I’ve seen. Minus the rain and the mud it may have been tops!

Even after superstardom, The Eagles were easy to mock. And mocked they were, relentlessly, by hipsters and critics… an easy target. Still, even the most relentless of critics, Robert Christgau, wrote: “Do I hate music that has been giving me pleasure all weekend, made by for human beings I’ve never met? Yeah, I think so. Listening to the Eagles has left me feeling alienated from things I used to love.”

So, there you have it from the godfather of the rock and roll commentariat… the music gives him pleasure, yet he hates it because it makes him question his beliefs.

That’s what good music does!

The remembrance on The Eagles website is simple and touching, and includes the lyrics from this Frey song:

From the Eagles’ Long Road Out of Eden album

A perfect day, the sun is sinkin’ low
As evening falls, the gentle breezes blow
The time we shared went by so fast
Just like a dream, we knew it couldn’t last
But I’d do it all again
If I could, somehow
But I must be leavin’ soon
It’s your world now

But first a kiss, one glass of wine
Just one more dance while there’s still time
My one last wish: someday, you’ll see
How hard I tried and how much you meant to me

That was my first thought, it had to be! After all, in this day in age of fake news sites and social media, there have been a slew of these types of hoaxes recently.

And he was so youthful! He just had a birthday and released an album! There was no way that David Bowie could be dead.

I wouldn’t call myself as a superfan but his presence has always been there in my musical consciousness… from Casey Kasem’s top 40 counting down to Fame in the mid-seventies to the weird guy in some movies, and later on MTV and the Labyrinth, he was a constant.

My appreciation for him grew out not from the source but from seeds that he had shaken off over time… covers by everyone from The Cure to Kurt Cobain told me I should look backward see what I had missed.

But the final straw came from an unlikely source… the Brazilian singer songwriter an actor Seu Jorge:

His fantastic covers of numerous classic Bowie tunes performed in Portuguese for the soundtrack of (and integrated into) the movie The Life Aquatic just took my breath away.

Bowie himself said that if Jorge had not recorded his songs in Portuguese “I would never have heard this new level of beauty which he has imbued them with”.

These stark and beautiful covers really did increase my respect for Bowie as a composer, and I have been collecting his back catalog ever since.

David Bowie was a youthful chameleon; never seeming to age but becoming more beautiful over time… adapting to his surroundings more rapidly than his predators could react.

He realized his image was paramount, even more so than his music at times. He was influential on more than just the music scene, but on human culture in general, and that is saying a lot since he was the co-creator of a whole genre of rock and roll known as glam and supremely influential in the advent of punk.

Not one to let his influence overtake him, he was perpetually inventive, throwing away one persona after the next as the mood drove him in a different direction. He would often outpace his biggest fans who would come to concerts dressed in their finest Ziggy Stardust paraphernalia only to be greeted by the Thin White Duke.

So today is a day to “put on your red shoes and dance the blues”… while you still can! As for me I will be surfing the thrift stores and record shops of the Pacific Northwest looking to plug the holes in my David Bowie collection!