I once dressed as Tom Petty for Halloween. The Tom Petty from the You Got Lucky music video to be exact:

Sure, I could’ve been mistaken for a hobo, or a chimney sweep, or just some dork in a trench-coat and a dumb hat… but in my mind, I was the leader of the dystopian gang the unearthed a boombox full of great tunes! I recalled this failed costume attempt recently while brainstorming dress-up ideas for Halloween 2016.

This memory seed took root and was nourished by news that all 16 of his studio albums will be re-issued in two enormous box sets of vinyl in December. Wow!

A post by Vinyl Stylus fueled the fire and the next I knew I committed four hours last Sunday to watching the Peter Bogdanovich documentary on Tom Petty and the Heartbreakers called Runnin’ Down a Dream:

I then spent most of Monday with my Tom Petty/Traveling Wilbury record collection: 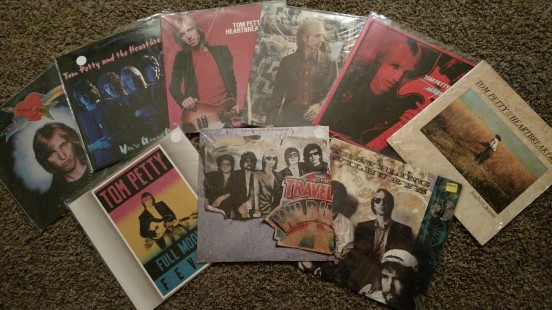 From the 1976 self titled debut Tom Petty and the Heartbreakers through 1985’s Southern Accents, I don’t know that I can name another artist with as consistent multi-album run of great records.

Sure, You’re Gonna Get It suffered from a sophomore slump, but it still has Need Too Know and Listen To Her Heart on side two!

Anyway, the movie is great. It has a lot of insight into the band, personalities, and the recording industry of their heyday. It It also has great guest appearances from the usual suspects.